Storytelling and the Pause 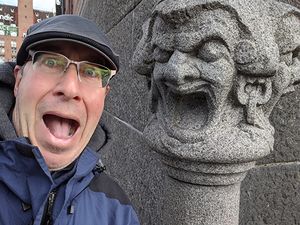 As you know, professional live face to face storytelling has stopped.

I was fortunate enough to get through 2/3 of a world tour before the shutdown.

This is an article was just published in the UK storytelling Magazine Facts and Fiction. You can subscribe here: https://petecastle.co.uk/fandf/enter/

Storytelling and The Pause

On Wednesday, March 11, 2020, I received word that my live storytelling career had been put into a medically induced coma.

I was in Copenhagen on tour, and had just finished a lovely dinner with my son, when news came that the government of Denmark was closing everything. The school workshops I had planned were cancelled. An evening performance at a small spoken-word venue was cancelled. The money that would have covered that part of the trip evaporated.

All day Thursday, I wandered around Copenhagen, trying not to feel sorry for myself. The Viking Museum was closed. My son was busy dealing with the cancellation of his study abroad program. It was windy and cold. I wanted to want to get drunk, but didn’t. By Friday we were both headed home, hoping not to catch the virus on the airplane.

Storytelling, the way I’ve practiced, it isn’t just another word for making a film or writing a book or selling you a product. It’s a live and in-person experience that’s distinct from theatrical monologue, solo performance art, or comedy.

I stand at the front of a room. I look out at the audience, and pick from a list of about 200 stories in my head, the best and most appropriate tale for that moment.

It’s magical. The audience vanishes. I vanish. All that exists is the story, created with words and imagination.

That whole experience is, for the forseeable future, dead and gone.

But it’s a crock. While I’m sure that there are nimble and facile tellers out there who will adopt this new form and make it breathe – and perhaps I will even figure out a way to join them — it’s just not the same.

If I’m honest, one of the reasons my storytelling worked was because there was no competition. In the moment of telling, I’M THE ONE IN THE FRONT OF THE ROOM. People would come to see me. Or at least to see storytelling.

And I rewarded them by being engaging and entertaining. I’m not a traditional teller. I didn’t grow up in an oral culture. Although my stories could be educational, I usually don’t have an agenda, or even a moral.

It wasn’t high art. Occasionally, it was deep, but honestly… my mission was to Transmit Joy with words.

I told “Three pigs” to preschoolers, “The Zombie Cat” at summer camps, and “Goldilocks and the Three Bubbes” to senior citizens. I frequently convinced ninth graders that a giant slug ate my sister.

Once, at a “true stories” event, an audience of adults gasped when they heard me confess to murdering my on father with a nail gun. (Then, they were furious, when they realized that the “true” part was the frame at the very beginning when I had said, “My therapist told me to kill my father, so I wrote this story…”)

For me, the juice was in that moment of suspension when the crowd of young and old, black and white and yellow and brown and red, rich and poor all become enmeshed in the story. The bonus was that storytelling brought diverse audiences of all ages together in a shared experience that was indescribable.

But it was live. Face-to-face. And intimate.

Not a bunch of people in different rooms staring through their screens at my head.

The virus has put the whole thing on pause. Maybe it’s finished.

No, of course storytelling won’t die. If everything falls apart, I guarantee that those of us who survive will be telling stories (and singing songs) around campfires.

Honestly, I can’t believe that I’ve managed to get paid for the past twenty years of speaking. They call that “imposter” syndrome. But recently, I realized that my children all grew up knowing that their father was a writer and “professional storyteller.” So it must be true.

But mass gatherings? Audiences that pay to be in an enclosed space with strangers? Before The Pause, our society was already heavily invested in home entertainment. We spent thousands on video screens, laptops, tablets and hundreds a month to pay for phone and internet services, games, and streaming subscriptions. We spent more time “connecting” on social media and less time reading. We already spent days binge watching on the couch.

Even before The Pause, those of us who told stories saw our audiences dwindle.

I have been so fortunate. Thousands of performances for hundreds of thousands of listeners around the world, sneaking most a final world tour in under the wire.

At the time I didn’t know it, but my last event before it all stopped was an open mic in London called, “Tales in Tooting.”

Hosted by Niall Mooranji it was a small gathering of listeners with a few tellers, many from the Discover Children’s Story Centre. Over several fine pints of real ale I was treated to stories of Britain, fairy tales in a way Americans just don’t get, and adventures from around the world. Niall told a draft excerpt of a piece on “The Uprising” in India.

When I stood (because, let’s face it, give me an opportunity and I’m going to take it) I said that I felt overwhelmed by the variety and physicality of their stories.

I launched into, “The Two Monks and the Gross Slimy Monster.” It’s a humorous take on the Zen Bones story about two monks and a woman.

As I sat down to write this piece, I realized that this was the very first story I ever told to a group of professional storytellers at Sharing the Fire way back in 2001.

“Grasshopper,” the master says at the end, “I left that monster on the other side of the river. You have been carrying her with you this whole way.”

The stages and nightclubs, classrooms, libraries, concert halls, auditoriums, even the parks are closed.

I’m going to miss it. We all are. In the coming months we will write (and webcast) and record new material appropriate to the zeitgeist.

“After the time of distancing, people came together. They were reluctant to come close, to hug or kiss.
“Then someone said, ‘Let me tell you a story…’ And the world was reborn.”

This article is copyright 2020 by Mark Binder, all rights reserved.

Read the PDF  "Storytelling and the Pause"

This article was published in the British storytelling magazine Facts and Fiction. Brilliantly edited by Pete Castle, I highly recommend you subscribe.
Subscribe here: https://petecastle.co.uk/fandf/enter/